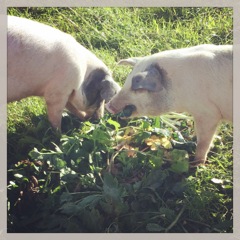 so, its been a few months since i had the time to sit down and write about what is occurring here with our forest garden build.  I’ve been away with singers various and seen all manner of different places in the last few months. always nice to get home though and have a decent cup of tea…  margaret and susan have had the snouts to the ground and have been slowly getting on with it. pigs are natures plough..they dont damage the soil structure in the same way a rotavator would and they leave the tiny mycelium threads in place which is a great thing.   it was good to see some visible progress when i came home.   they seem to have favoured the outer edges of the paddock for getting those hard snouts in and rifling around looking for something more interesting than grass roots.  sadly, they are probably only finding grass roots under the ground but they are not deterred!  they’ve also been doing some growing. they are now fairly hefty porkers. they continue to do some arguing amongst themselves, but ultimately they are doing good work.  with the temperatures dropping a good bit in the past month, and them having a growing spurt we need to keep them topped up with their dry food as well as any scraps that we have left in the house. 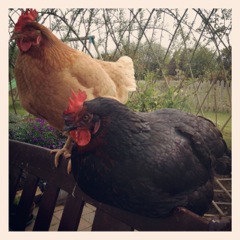 the chickens are mightily unimpressed with the arrival of the pigs as now they tend not to get the kitchen scraps.  one thing we have witnessed for ourselves though is that the pig is an animal that REALLY enjoys its grub!  my goodness, but they just cant wait to get their noses down and stuck in to whatever is on the menu.  not too keen on any lemon skins, but they will begrudgingly get around to them when all else has been demolished – a nice tart palate cleanser maybe!!  we’ve split the feeding times to twice a day to make it doubly exciting for them. i think they appreciate it.. 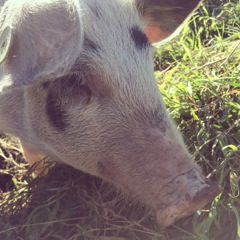 do i look like i care what you birds think?

this, if you remember, is an ongoing experiment into building a forest garden from a bare patch of land.  we didnt really know how long it would take the porkers to turn up the roots of the grass and other plants growing there.  we had guessed that it might have taken them into november to do the lot, but we can see now that that was over estimating the two pigs.  its actually a fairly big space and we started to rope off bits to concentrate their efforts more.  this is working and now i think we’ll rope off the first 2 metres in from the outside edge and try encourage them into the central bit.

we had hoped that the turning over of this soil would be done by novembers end so that we could think about planting up our first trees (mary tells me that november  – february is the best time to do this with bare root trees and hedging). we are now going to shunt our plans back a little as a) the pigs are not finished their work yet and b) we have this thing called christmas upon us and c) my man power (joe) is off doing some gigs in december and early january.  our plan now is to wait until towards the end of january. marg and sue should have got the work done by then and i can move them on to another area that needs looking at while we get in the basic structure of the garden.

a few stages of pig work.  these shots dont show just how good a job they are doing in clearing the roots out and leaving a really well manuared decent bit of earth underneath.  the tussocky bits of grass which they’ve effectively pulled out and left on top of the dirt will act as a great mulch too.

the next stage is going to be building an A-frame to measure the contours of the land so that we can precisely pin point where the swales (to retain water) should go within the design.  we will mark out our human areas like paths and spaces for us to enjoy within the garden.  source some hard core and path materials and some local muscle to help joe with the actual physical work that we know will be coming our way soon…. 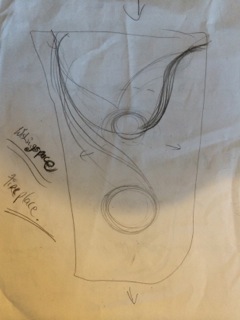 as I’ve said before, I’m lucky enough to have a mary to come and help with the design and build process. on the first inspection she took some measurements and made some sketches and did a rough plan of what goes where and how it could be mapped out.  this here was drawing one.  the arrows mean something to herself! i think it was the camber of the land roughly. she is keen for us to incorporate a wishing space and/or fire place within this design.   i think these are probably key elements in most of marys designs, and i get it and am willing to go with it.  sure, where else makes most sense to sit and think and wish and dream and ponder?  outside within a natural space built by your own hands with your own families needs in mind, has to be a good a place as any… 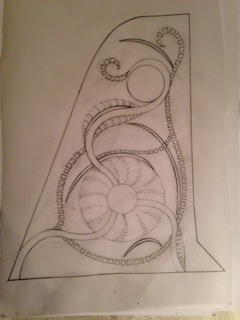 we talked about a few ideas over the last month and mary has fine tuned the design from the one above to the one on the right.

this is mostly paths, placement of the outside sitting down area around the fire pit within the circle at the bottom and the bigger circle at the top will have one of the bigger trees and be the wishing space.  the other marks and swirls and things are hugelkulture and swale placements.  we’ll get into that down the line. mary is now working on the side drawings of what it should look like and a plan with trees and other bits and their spread.

another very important element is that i need to do a series of soil and sub soil tests, just to see how alkaline or acid this soil is in that plot.  it looks nice to me, but i dont think thats a good enough analysis!!…..theres a bit of science involved here and once we have determined what is going on with the soil, we can think about planting some dynamic accumulator plants.   (apparently these dynamic plants throw roots way way down into the ground and can draw up the nutrients that the soil is lacking.  clever things i say…..things of a dynamic accumulator nature can be stinging nettles, comfrey, sorrels and docks (i know this goes against the grain but just saying….), vetches.  they will all take up trace elements from way underground with their smart roots.  they dont exist for no good reason whether we like them or not!   we are also going to sow some other d.a. plants which are a bit more useable for us humans – rhubarb, italian rye, chicory, thyme, fennel, evening primrose and peppermint.

even if this soil is top notch, we will ultimately need a LOT of good mulching material to keep the hedging and trees and shrubs mulched with nutrient rich stuff in the first years.   this is apparently a very good idea for the healthy establishment of a young forest garden and it can hugely improve the health of it and its yield capacity.  it should also minimise future work (i like that bit).  without paying attention to the soil quality we could be creating unnecessary competition, both for scarce nutrients and with a possibly pre existing ‘weed’ seed bank….

with that in mind and the fact that the pigs have cleared a good band of grass from around the perimeter, myself and mary ordered some seeds from seedaholic.com yesterday with a view to planting the bare patches with some green manure and some dynamic accumulators over the coming weeks.

all good fun and games basically..right. signing off. have a wonderful christmas and see you on the other side!