June update: The design is complete! 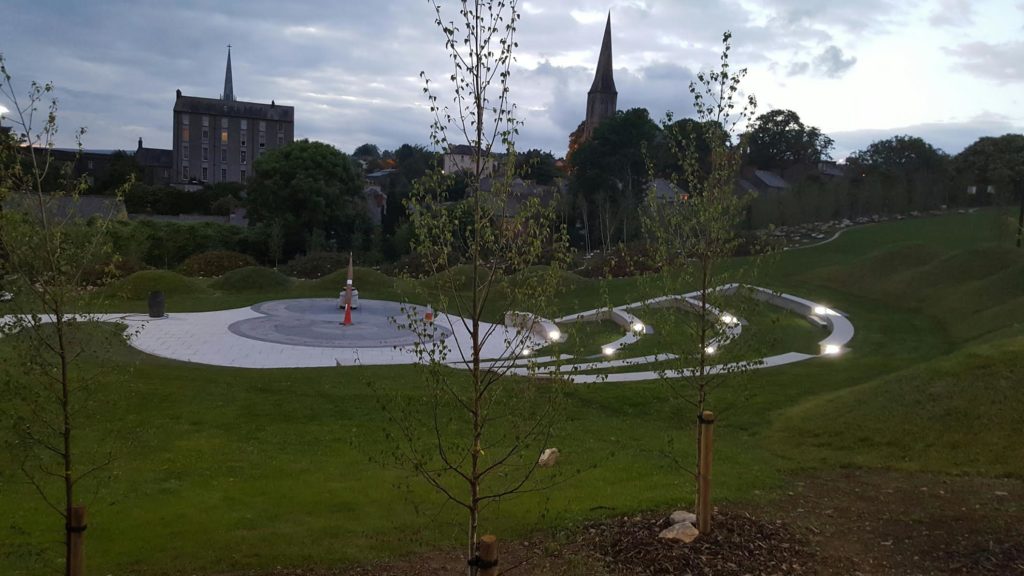 Read about the park and its debut in The New Ross Echo.

Update! Here’s a look at how the design is progressing as of May! 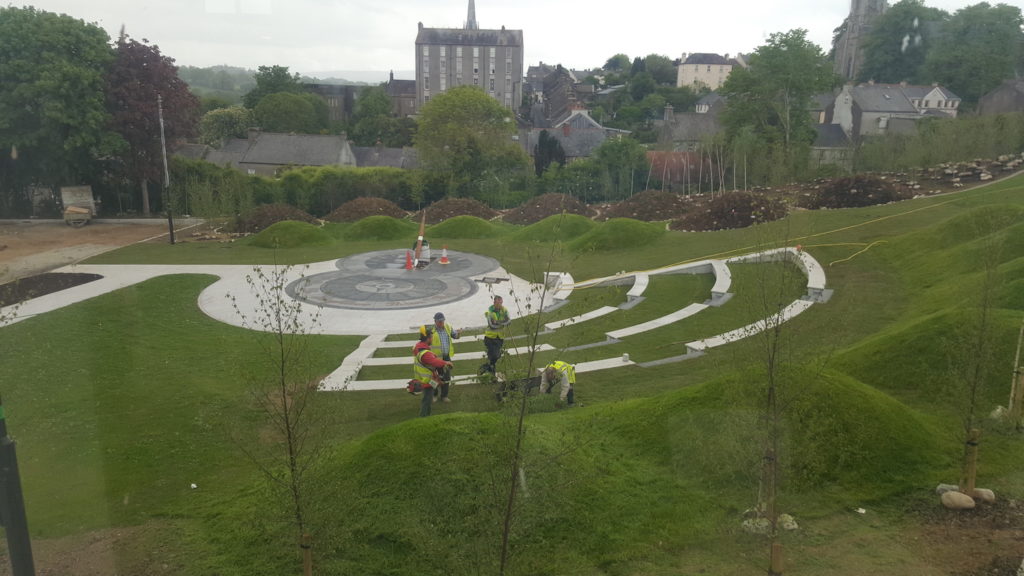 Currently Mary is implementing a design concept for the New Ross Library Park in County Wexford. Have a look at her plans & some photos of the progress below. 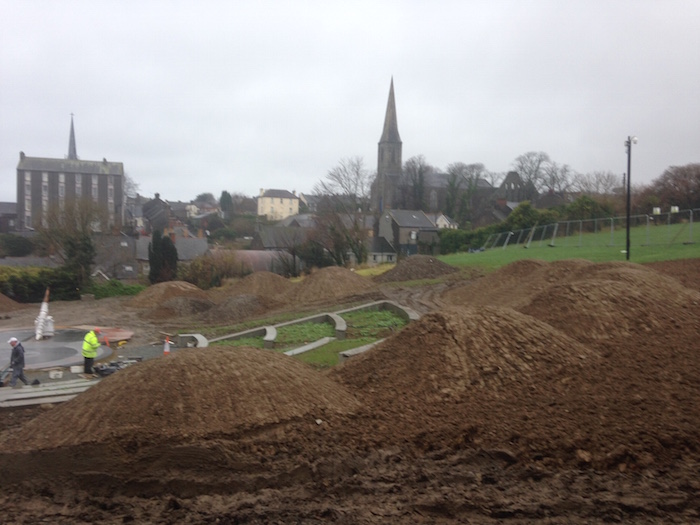 This garden draws on three periods of the history of writing and storytelling in Ireland.
1. Irish Mythology
2. The First example of writing in Ireland, the Ogham script.
3. The monastic tradition of illuminated scripts.

The terraces and sundial (based on the pen is mightier than the sword and the whole concept of time) were designed by Eamonn Hore from Wexford Co Council.

1. At the entrance to the library, I planned a hazel wood, eventually to be under planted with woodrushes, wild garlic, foxgloves and bluebells. Irish tradition holds that hazel trees were said to contain all the knowledge of the universe. The nuts from a hazel were what granted this knowledge to the salmon of knowledge in the original myth about Fionn mac Cumhaill.

There is presently a plan for a lovely outdoor theatre space at the lowest point of the park. People will be invited to sit on the surrounding grass terraces here. I plan to extend this seating area by surrounding the terraces and the stage with a circle of large grassy knolls. With a second larger row of heather carpeted knolls behind this. Heather is a plant long associated with dreaming and inspiration in Ireland. This whole area will then be surrounded by birch woodland. In Ireland, the birch tree is associated with the energy of embracing new ideas with the inevitability of change. A suitable tree for writers, poets and dreamers. It is a tree associated with creative energy, a pioneer species that emerges rapidly in damaged or cleared land, making way for the elder trees, the larger species that come later. 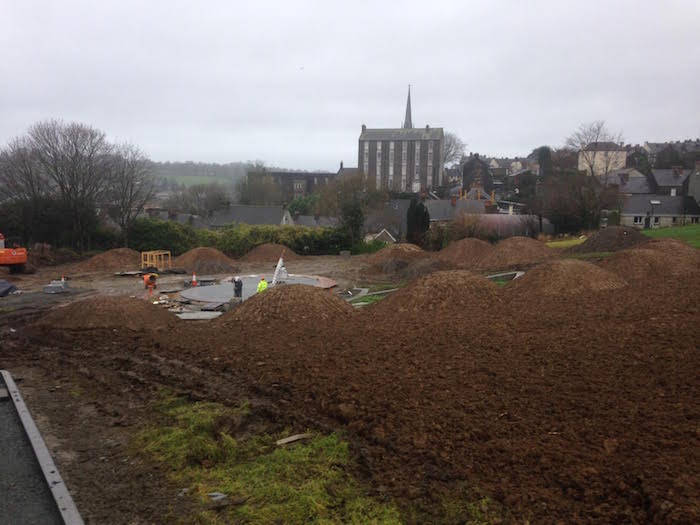 The grassy mounds also represent the people of the mounds, the Tuatha De Dannan (the fairy folk) who were driven underground by the arrival of the Milesian race in Ireland and are reputed to live in these fairy mounds. In Irish Mythology, Brigit came from this God like race, around which many of our myths and stories are based. They were endowed with supernatural abilities and storytelling was valued above all gifts.

St Brigid was originally the pagan Goddess Bríd from the Tuatha Dé Dannan race, long before she was blended into the Christian faith in Ireland. She presided over the gifts of healing, inspiration and poetry along with many responsibilities. Further up the slope in the park, overlooking the town, I have planned a circle of oak trees. Oak groves have long been associated with Bríd and Saint Brigid. At the center of this oak grove I have planned to grow a hawthorn ‘wishing tree’. Here, people will be invited to tie their wishes or prayers onto the branches with ribbons, in the tradition of the rag tree in Ireland. 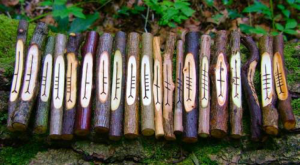 2. Ogham is the earliest form of writing in Ireland and dates from around the 5th Century A.D. Reputed to have been named after Ogma, the brother of the pagan Goddess Bríd. The letter symbols are made up of a central line with a number of strokes along or across the line. The symbols were carved on standing stones to commemorate someone or mark a place name and they were most probably also carved on wood, but no examples remain. These stones can still be seen scattered in fields all across the island of Ireland. The edge of the stones was used as the central line and the strokes were carved across this axis. They were read from the bottom up, left hand side first, across the top and down the right hand side if necessary. The Ogham alphabet was sometimes referred to as the Celtic tree alphabet as a number of the symbols were linked to old Irish names for certain trees. In this park, I have designed an Ogham tree walk with the first 15 letters of the Ogham alphabet and their associated trees, in order. A detail on a plaque or a piece of wood at the base of each tree will explain the symbol associated with each tree. 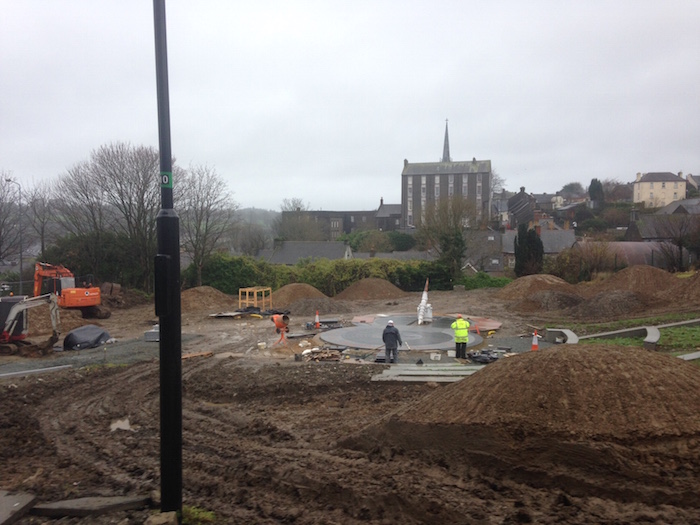 3. The Ogham tree walkway links across the central path to the monastic garden. The spiral pattern on the ground is meant to refer to the beautiful illuminated manuscripts, which were written with such care and beauty between 650 and 1100 CE. Irish illustrated gospel texts were an insular art form and took place at monasteries in Ireland. These texts were beautifully written on animal skins within an intricate set of Celtic interlace patterns and geometric shapes. Like a typical monastic garden, this garden will have woven – wicker raised beds, filled with medicinal and culinary herbs. The north facing boundary wall should also be clothed in climbers to soften this end of the park.

The car park is to be surrounded with wild berry bushes, wild roses and other native shrubs, which also would have been important to the monks in their woodland gardens. 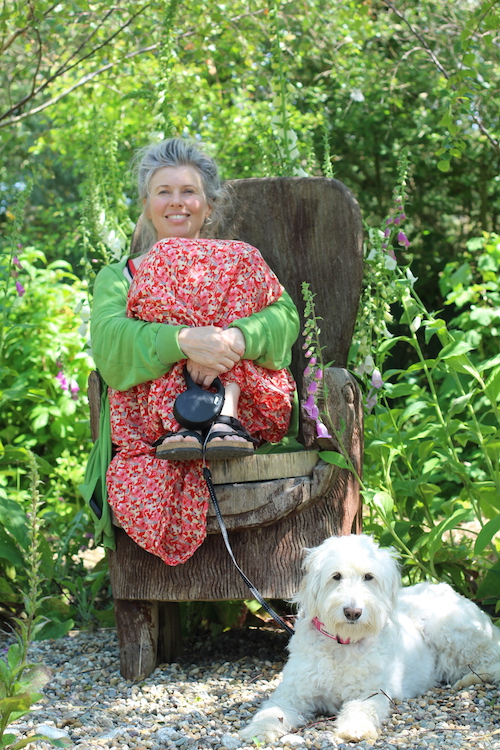 Claire & Joe created a forest garden from scratch with guidance from Mary's book The Garden Awakening - Designs to Nurture Ourselves and Our Land. You can go back and read about its origins here & then keep up with current happenings at their Instagram @IrishForestGarden.
💚 spotted this #moth flying around the raspberr

❤️🖤🤍🐦 found myself crawling along the

🌳🌳🌳🌳 the wider picture and the close u

Only here for a moment.

Build an Ark, not a garden. Acts of Restorative ki

Her skin is my skin. Everything we are is made fro